Written by
Steve
Last Updated on November 3 2020 by Steve
Table could not be displayed.

It is one of those presents that any kid would love to receive, it has all the features you would find on a normal bike, but it is battery powered. The Electric Dirt Bike is perfect for those kids that enjoy a thrill. It can go across dirt tracks and bumps thanks to its strong construction. This list features the top three Dirt Bikes for kids on the market today. 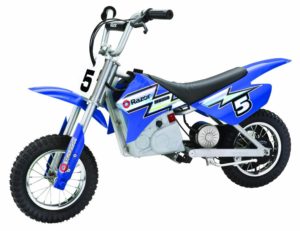 This electric dirt bike from Razor will keep the children entertained for many hours. It has some very nice features that give it an authentic dirt bike feel. It also looks the part with its racing decals and construction. Here are some of its other features.

With these features along with a hand operated rear break and pneumatic tyres, it will give a lot of pleasure along with a feeling of riding a real dirt bike. 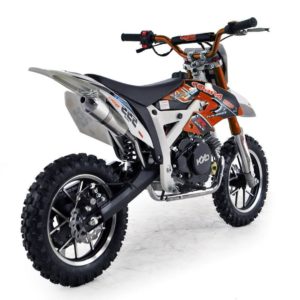 This petrol motorcycle from Fun Bikes really looks the part with its number plate on the front and racing decals. It is a smaller version of a regular dirt bike, aimed at junior riders. Here are some of its features.

The Fun Bikes Cobra 4S is a small and compact bike that is light enough to transport around easily in a car. The controls are simple and easy to operate and it has some nice safety features. 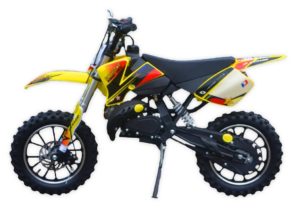 This bike is a specially designed petrol dirt bike for juniors. It is the same as a regular sized motor bike, just at a smaller scale. They are perfect for off road scrambler style terrain and are equipped with a good engine. Let us see the features of this bike.

The Mini Moto Coyote Dirt Bike is a great starter bike for any junior looking to start competing in motocross events. Although it is light, it is well made and durable, so it won’t get damaged or break down.

The top spot goes to the Razor MX350 Electric Dirt Bike. It has all the things you would expect on a real dirt bike, as well as a long battery capacity and high speed. Perfect for a juniors first motor bike.

The Carrera vengeance mountain bike may be one of the most enjoyable rides you can run into. It is […]
READ MORE

KTM Electric Bike Review Electric mountain bikes are great not only for rough trail riding, but for city riding and […]
READ MORE

Kalkhoff Include 10 E-bike Kalkhoff's e-bike range is no stranger in the electric bike industry. Kalkhoff has been manufacturing bikes […]
READ MORE

The electric bike, sometimes called an e-bike, is in many respects a regular bicycle. The exception is that it is fitted with a motor and a battery.