Written by
Sam
Last Updated on December 11 2022 by Sam

If you are looking for a heavy-duty cargo ebike with plenty of storage space but with an even more modern design, then Fiido D11 is the bike for you. 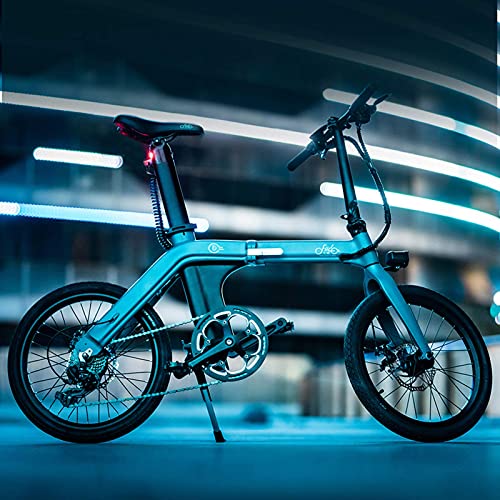 After riding the Fiido D11 and reviewing its specs, I gained a new appreciation for folding electric bicycles and e-bicycles with lower wattage and horsepower.

Whenever I think about electric bicycles, the first thing that comes to mind is powerful rear hub motors that can help riders conquer steep inclines and pull heavy loads. However, this is not the only purpose that electric bicycles may serve.

When it comes to e-bikes, the Fiido D11 demonstrates how little can be more when it's done right. My ride on the D11 was one of a kind because of its foldable design and unconventional battery positioning, which set it apart from my level riding experiences on other electric bicycles. It gives the impression that a smart gentleman's bicycle was developed more for efficiency and good looks than for power and torque.

You're never going to be blown away by the D11's power, but that's not the goal; what matters is that it allows you to ride a bike first and have assistance second. Not only does the Fiido D11 fold up into a compact size, but it also allows you to do so. In exchange for having top speeds lower than the typical electric bicycle, riders are treated to a customer experience that is more focused on taking in the scenery, having an easy time commuting, and having fun while riding. The Fiido D11 will be ready for action regardless of whether you pedal a couple of kilometres to work or around the neighbourhood.

Our Review Of Fiido D11

Remember that Fiido didn't set out to make a quick bike with the D11. Its primary function is to link you to your workplace, which may be many miles from the bus stop. Lightweight and powerful enough for the D11's intended application, Fiido developed it around a 250W engine.

The top speed of the D11 is 16 mph, making it comparable to electric scooters. While the D11's top speed is comparable to that of a scooter, it excels on hills and in general control. My testing of the D11's engine and top speed has convinced me that it serves the premium bike's stated purpose.

You can expect to achieve speeds between 10 and 13 mph while riding the D11 without help or with any of its three aid settings.

Due to the D11's maximum speed of 15 mph, I frequently rode with the pedal assist to its highest setting or in moped and pedal assist mode. It would help if you took advantage of the lower aid levels when your battery life is short, but I don't think anyone will use them otherwise.

On mild inclines is when I saw the aid the most. The D11 helped me enough to stay in the same gear I was in before the hill. After riding the Fiido D11 for a while, I appreciated its quiet acceleration and constant top speed regardless of the terrain. Because of the slower speed, I could take in more of my surroundings and enjoy the journey more than usual.

Fiido said the D11 would last 50-62 miles, but it only lasted around half that. With the D11's maximum assist setting, I could travel 33.68 miles before the battery went out.

If you're taking the D11 for a spin with a fully charged battery, I don't see any reason you wouldn't arrive at your destination with some juice left over, except for a commuting distance of more than fifty miles.

The Fiido D11 was a pleasant ride for distances between 5 and 10 miles, which is the sweet spot for such a little bike. However, after that period, I started to feel pain in my arms and lower back. This isn't the D11's fault, as it wasn't designed for long-distance cycling, but it's something to think about if your commute takes more than a few miles.

A taller rider like myself (I'm 6'0") may find the reach to be a bit restrictive, but for shorter periods in the saddle, this is less of a huge issue. The D11 is a folding bike, not a great commuter, so it sacrifices some pedalling efficiency and long-distance comfort in exchange for its compact storage size.

It took me some time to grasp the D11's motor, but I've enjoyed its low-key aesthetic. The quiet, lightweight motor is simple to ignore. It won't blow your mind, but it offers stability and control.

I wasn't anticipating the maximum assistance level to be powerful enough to get it up our hill test. While it wasn't quick, it had enough juice to keep me from burning out on the steep slope.

The D11 brushless motor never let me go over 15 mph, but I rarely dropped below ten mph. I can't complain about the gear motor's consistency and speed.

The Fiido D11's 36V, 11.6Ah battery has a unique design. Seatposts are just as important as batteries. The D11's dual-purpose design improved its appearance and performance.

The battery's charge life is long. Considering it's only 36V, 11.6Ah. In our minimum assist test, the battery lasted 47.23 miles.

The battery life exceeds the D11's optimal mileage, but they added a huge battery. Due to Fiio's larger battery, the D11 doesn't need to be charged after every ride. It'll last two weeks if you ride 4 miles a day on the D11.

The Fiido D11 has a left-hand LCD display. The display's sleek, simple style was appealing. The UI was strange at first.

The pedal assist button was different from what I'm used to. The battery display has one button to alter help levels, which I had to get used to.

After a few miles, I got used to the display interface, and it worked fine. This display should suffice if you don't need a precise mileage readout.

The Fiido D11 has three pedal assist levels and a handlebar throttle. In PAS 1 and 2, I hardly noticed I was riding an e-bike until I reached a hill, which helped me maintain speed.

The Fiido D11 isn't fast, but it has enough power to help you climb hills.

I rode the D11 mostly in PAS 3, and most riders will. PAS 3 is the only way to tell you're riding an electric bike ride beside the throttle.

The throttle has a "moped" feature that engages after 5 seconds. This was fun and nice for the way the D11 is meant to be ridden; it had that motor scooter feeling I like for short commutes. The moped feature shuts off with a quick pull of a brake lever.

We have also written a review article on the Yose Power conversion kit.

1. Is Fiido a Chinese company?

A well-known Chinese manufacturer of electric bicycles has opened up new distribution centres in the United States to meet the ever-increasing demand practically and speedily. FIIDO is a well-known firm that was the first to market high-performance electric bicycles such as the D11 and the D4S.

2. Are Fiido bikes legal in Ireland?

The D11 does have a waterproof rating of IP54.

So, what did we think of the Fiido D11? Overall, it’s a great bike. It accelerates quickly and has a good range for price. The comfort is also much better than other budget bikes in this category. Some people might not like that there’s no pedal assistance at high speeds, but overall we thought it was a great e-bike for the money.

Moreover, you should also read our expert review of the Scott e-bike.

Pedal assist Vs Throttle E-bike: Which One Should You Buy?

How Hard Is It To Pedal An Electric Bike?

Do I Need Gears On My Electric Bike?