Should I Get a Ghost E-Bike? - Our Guide & Review

Ghost are no stranger in the e-bike industry in Europe, the German brand makes all kinds of e-bikes you can think of, from hardtail mountain bikes to road bikes suiting both men and women.

Since 1993 these Ghost e-bikes have come with carbon or aluminium frames, and they make ideal bikes for people who are on a budget, as you truly get the value according to the money you spend.

There is a huge range of Ghost bikes on the market, so to make things clearer we have done an overview of the most popular ghost models in each category down below and reviewed its newer model the Ghost Hybride SL AMR S1.7+ electric mountain bike in more detail.

So before you ghost us, let's get into the reviews!

An Overview Of The Ghost E-Bike Range

Ghost currently divides their range of mountain bikes into suspended and hardtail bikes, and their commuting bikes into E-Square cross and E-Square trekking, these all consist of entry-level and high-end carbon bikes.

We will do a short overview of the different e-bikes in their categories below.

The SL AMR series by Ghost is a great mountain bike series ranging between prices of £2000-£4000 suiting both advanced and entry-level bikers.

All bikes from this range have travel between 130mm and 150mm using suspension from either Rock Shox, Formula or Cane Creek for a smooth ride. They all use hydraulic disc brakes too.

Although these bikes are great, people have noticed a downfall in their build quality because of their lower price.

This Ghost Kato Series consists of just two models with a very affordable price to both, they use aluminium frames and come with mainly Shimano components for guaranteed quality.

Differences between both bikes in this series are the brakes used, front fork used and the more expensive model has a slightly bigger gear set. They aren't the best spec bikes but are worth it if you want a good trail bike on a budget.

These full suspension mountain bikes have aluminium frames and Enduro geometry for riding up and downhills, all bikes come with a 1x12 gear set too.

All shifting is done by the SRAM Eagle brands making them perfect for racing or trail riding, but they do have a pretty heavyweight compared to their carbon models.

Consisting of nine models, anyone can find what they want in the Ghost Kato series, they are available with 26”, 27.5”, and 29” and have different components according to the price of the model that you buy.

The top e-bike (the Kato 7.9 AL U) from this range uses 100mm fork travel and a Shimano groupset, some of the cheaper models do have pretty low-quality parts, so be cautious when deciding.

These group of six bikes are more expensive than the Kato range and use carbon frames on their design for racing with RockShox forks and gears ranging between 12 and 11.

The bikes are said to be a little more uncomfortable but this is because the geometry of the bike collection is designed for speed and racing.

You can get the bikes with 27.5-inch wheels or 29-inch and they all come with Rodi wheelsets.

This Lanao series are hardtail mountain bikes designed specifically for women only with seven models on offer and an affordable aluminium design.

Most of the mid-range bikes use Shimano Deore components and are a great beginner model because of their comfortable bike touring geometry and hydraulic disc brakes.

Only one hardtail model is up for grabs in the Asket series, the bike has components such as the 11-speed Shimano Deore drivetrain and hydraulic disc brakes and uses an aluminium frame.

Because of the lower price, this electric bike does fall short on a few components with smaller wheels but is a reliable bikes model, so great for beginners.

Bikes with wheel sizes differ, gears and designs, so choosing the right bike for your budget and the type of riding you will be doing is important.

For the motor, this Ghost e-bikes comes with a Shimano STEPS DU-E8000 mid-drive motor and the motor supplies consistent power reaching top speeds of 15.6mph, making the bike road legal.

The class one e-bike does not include throttle power using assist mode only.

The motor power is a little weak considering this Ghost bike is aimed to be a mountain bike, we appreciate its mid-drive position however which does produce a more natural feel when riding the bike.

The whole battery life is said to last over 1000 charging cycles and has a bike charging time of about five hours.

We like how integrated the battery is into the downtube of the e-bike although its range is pretty limited compared to other bikes of a similar spec on the market.

The electric bike is equipped with three levels of pedal assist; the Eco assist mode, trail assist mode and boost assist mode. It uses a small digital display on the bike to show metrics and switch through the assist modes.

For power, the pedal assist modes included on this bike are ample, and we like the eco mode for preserving the 500W integrated lithium-ion battery life too. But the digital display on this bike is very small, so small that it is quite hard to read.

Frame-wise, this e-bike excels, the frame is fitted with a RockShox Super Deluxe Coil Select R, the rear coil shock has a travel of 140mm and the whole frame is made of aluminium.

Its wide handlebars make the bike easy to control too.

For the price, you do get a solid balance bikes model which is comfortable to ride because of its coil shock, it's downfall has to be its weight from the aluminium frame and dropper seat post which works inconsistently.

The electric bike is fitted with TRP G-Spec Trail S brakes and the bike uses Shimano SLX and XT components in its drivetrain.

We aren't too fussed about the Shimano drivetrain system in this electric bike but we do think the brake set is pretty poor for mountain biking, hydraulic disc brakes should be included to make this bike higher spec.

For wheels, the e-bike has a 29" front wheel and a 27.5" rear wheel mixed set allowing for better traction off-road.

The wider rear tyre on the back of the bike does make ride time feel a little imbalanced but the whole setup does provide good traction on trails when riding.

Is The Ghost E-Bike Range Worth It?

Overall, we do like the Ghost electric bike range, it has every bike you could think of for any type of riding and fits all kinds of budget too.

The Ghost Hybride SL AMR S1.7+ Electric Mountain Bike we reviewed in more detail is an affordable and great bike for beginners, however, we would suggest picking a more high-quality bike from their range if you looking for a bike to take on more technical trail rides.

Hi! my name is Sam Lawrence. I am a 27 year old cycling fanatic. I created this E-BikeReview.UK as a resource for people when shopping for an electric bike. My career in bicycles started when I was a child. I’ve always loved bikes. I started my own bike buying and selling business before I left school and have been running a very successful bike shop in Ledbury (west England) since I was 18 years old.

Are Voodoo Bikes Any Good? Find Out Here! 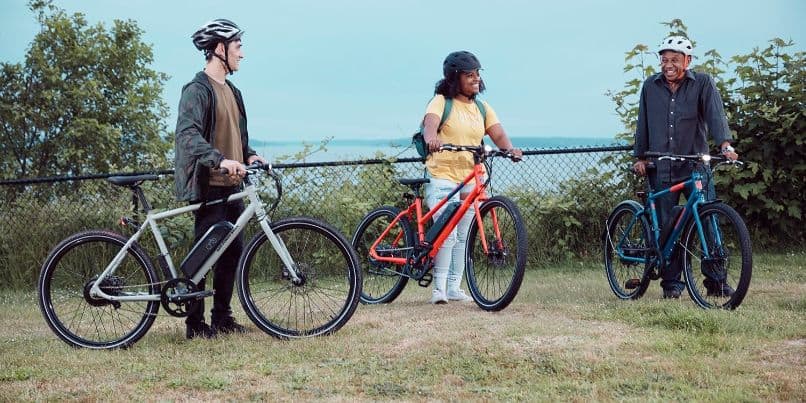 Do Ebikes Actually Provide Exercise Or Are They Cheating?

How To Test An EBike Motor? Find Out Here! - (to write)