How To Charge An Electric Bike Battery At Home? Find Out Here! 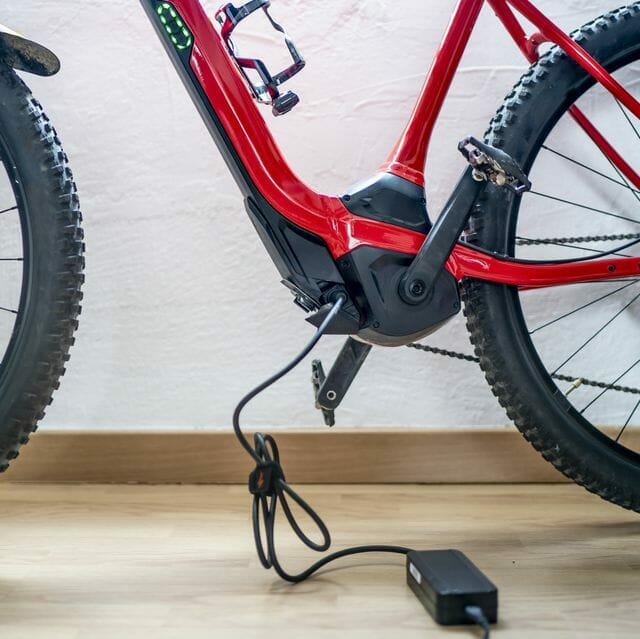 How To Charge An Electric Bike Battery At Home?

When I was in the market for a brand-new electric bike not so long ago, I couldn't help but wonder about the charging process for the battery. Therefore, I performed some studies to figure out the correct procedure for charging the batteries included in electric bikes.

How exactly does one charge an electric bicycle? Take the batteries out of the bike, make sure the switch is off, plug in the charging wire from the bike to a regular wall socket, and then plug in the batteries to charge.

There are many different elements to consider when it comes to charging an e-bike battery and trying to get the most out of it. Additionally, there are a lot of different things that you can do to increase its performance and prolong its lifespan.

The process of charging the battery of an electric bike will look different depending on who made the battery. Still, certain general guidelines can be followed that will help you do it correctly most of the time.

It is possible to position the bay in a number of different areas, and the precise location will change according to the specific model of the e-bike in question; nevertheless, they are typically positioned in the bike's centre or directly behind the seat.

In addition to this, the majority of electric bicycles will come with a charger that is comprised of a power supply that has slots for two cables. On one end of the power supply, you will attach a cable that connects to the wall outlet; on the other, you will connect a cable to the electric bicycle's battery. If you're a gamer, you might recognize the charging port for the Xbox One.

Most e-bike chargers will feature a red LED to indicate that the battery is still charging, and this LED will change to green to signify that the bike is completely charged after it has been charged.

Your electric bike's battery will need to be disconnected from the bike, turned off, connected to the power source, and then plugged into an outlet when it runs out of juice. After that, you'll be able to get back on your bike and go for a spin. That will finish up the bulk of your work for the day.

When should you charge your electric bike battery?

The indicator light on the battery of the vast majority of electric bikes will flash in some form as it is being charged, but the specific pattern may vary from model to model.

After charging for the required hours, the light will turn red, indicating that the battery needs recharging. You will then need to plug the charger into an electrical outlet.

Depending on your type of electric bicycle, it could be charged in 2 to 7 hours. However, most of the time, you don't need to recharge your batteries right away after each ride.

How much does it cost to charge an electric bike battery?

The amount that it will cost you to charge the battery of your electric bicycle will change based on the capacity of the battery as well as the price of the power bay where you reside.

If you have a battery that takes 10 amps and you live in an area where power costs $0.12 per kilowatt hour, the cost of charging your electric bike will be around $0.002 per mile, which is a very reasonable amount.

How long does the electric bike battery last?

Most batteries can withstand up to 1000 full charge cycles, but most lose less than 80 per cent of their capacity after 500 full charge cycles. If you charge a lithium battery when it still has 50% of its charge left, it will always show that it is 50% charged, no matter how long you charge it. Long distances may be covered on a pedal-assist electric bike, with the battery lasting anywhere from 10,000 to 30,000 miles, depending on the model and the rider's habits.

Either Samsung or Panasonic produces the vast majority of batteries. These companies estimate that their batteries are good for one thousand complete charges, and they often provide guarantees that cover continuous usage for two years. The cost to replace an electric battery can range anywhere from $500 to $800 based on the battery pack's dimensions and the battery's configuration.

Finding a replacement battery for an old device might be difficult if the manufacturer has gone out of business. On the other hand, the battery may be "repacked" at an additional cost of around $500.

Moreover, it would help if you read our article about the fastest mountain eclectic bikes in 2022.

Tips to increase the battery life of your electric bike

Your electric bike's battery is an important component that should not be overlooked. You want to keep it in excellent condition; therefore, here are five recommendations for charging your electric bike that is aimed at helping the battery on your e-bike last as long as possible.

When you first obtain a new electric bike, you should let the battery initial charge entirely for up to a day and a half before you ride it. This prolonged first charge helps condition the battery as soon as it is removed from its packaging by ensuring that current flows through all of the cells.

You should also read our article about starting the electric bike without a key.

Lithium battery packs included in most e-bikes should last longer if used consistently and charged regularly.

You don't often need to ride your electric bike until the battery is fully dead before charging it again. Instead, please make an effort to charge the battery while between 30 and 60 per cent of its capacity is still available.

However, some battery specialists recommend doing an occasional full drain on the battery, possibly once for every 30 to 40 charges. Aside from that, the rule of 30–60 per cent should be used.

Because riding your electric bike frequently is the only way to keep the extra battery charged, let this serve as more incentive for you to go out there and put some miles on your bike.

We have also written an article about charging your e-bike's battery without a charger. It will also help you if you read it.

A battery for an electric bike has the same feelings about the weather as most people who use electric bikes. Moderate temps are ideal.

When using an electric bike and when the battery is being charged, you should try to avoid excessive temperatures. This will help the battery last longer.

While charging the battery, it should be placed in an environment where the temperature ranges from just above freezing to no more than 110 degrees Fahrenheit at its hottest point. But why go to such great lengths?

It would be best for the temperature during charging to be between 60 and 80°F.

Don't just leave your electric bicycle plugged into its charging station for long periods of time; think about doing so for several days or even longer.

When you do this, you risk creating a situation where the battery may deplete, perhaps leaving it with only 95 per cent of its capacity. Afterwards, the charger begins filling out the battery with more charge. This ongoing pattern of insignificant discharges followed by brief periods of topping off creates a string of inefficient charging cycles.

There may be occasions when you need to put your electric bike's battery away. It seems like you could soon be going on a trip. It might be because the temperature is too low for the bike outside. No matter what, you should never keep the battery completely depleted; rather, you should aim for it to have between 40 and 70 per cent of its total capacity.

Moreover, you should read our article about the range of 5000w electric bikes.

1. How does pedalling charge the ebike's batteries?

Some electric bicycles are equipped with a function that allows the rider to charge the battery while using the bicycle. This happens automatically whenever you apply the brakes, and it may increase the range of your battery and battery age by anywhere from 5 to 10 per cent. However, this may result in an increase of around $200 in the cost of your electric bike, which may also make riding the electric bike a more challenging experience.

If you are concerned about how far your electric bike will be able to travel, you should bring an additional battery with you. By doing so, you will eliminate any worries that you will run out of energy while you are out riding your bike.

2. Should I charge my e-bike battery only at the full drain?

A fully dead battery is not necessary for replacement. If you want to extend the life of certain battery cells, several manufacturers advocate charging the battery before it runs out of juice. This extends the battery's power supply.

Because this is the case, it is most likely a wise decision to recharge the battery levels after each usage.

3. Should I eject the charging process before my electric bike battery gets full?

It does not harm to remove the plug on lithium chemistry batteries, which is what the vast majority of e-bike batteries comprise, and you may do this at any time.

The process goes through two separate cycles when the batteries are being charged. During the first cycle, the e-bike's battery will receive 80–90% of its total chargeback and charge at its maximum rate during this phase.

Since this is the case, you can safely assume that you will have charged the battery substantially even if you halt the charging process 30 minutes short of full capacity.

We have also written an article about how to charge the Ancheer electric bike, which will greatly help you if you read it.