How Much Weight Can An Electric Bike Pull? Find Out Here! 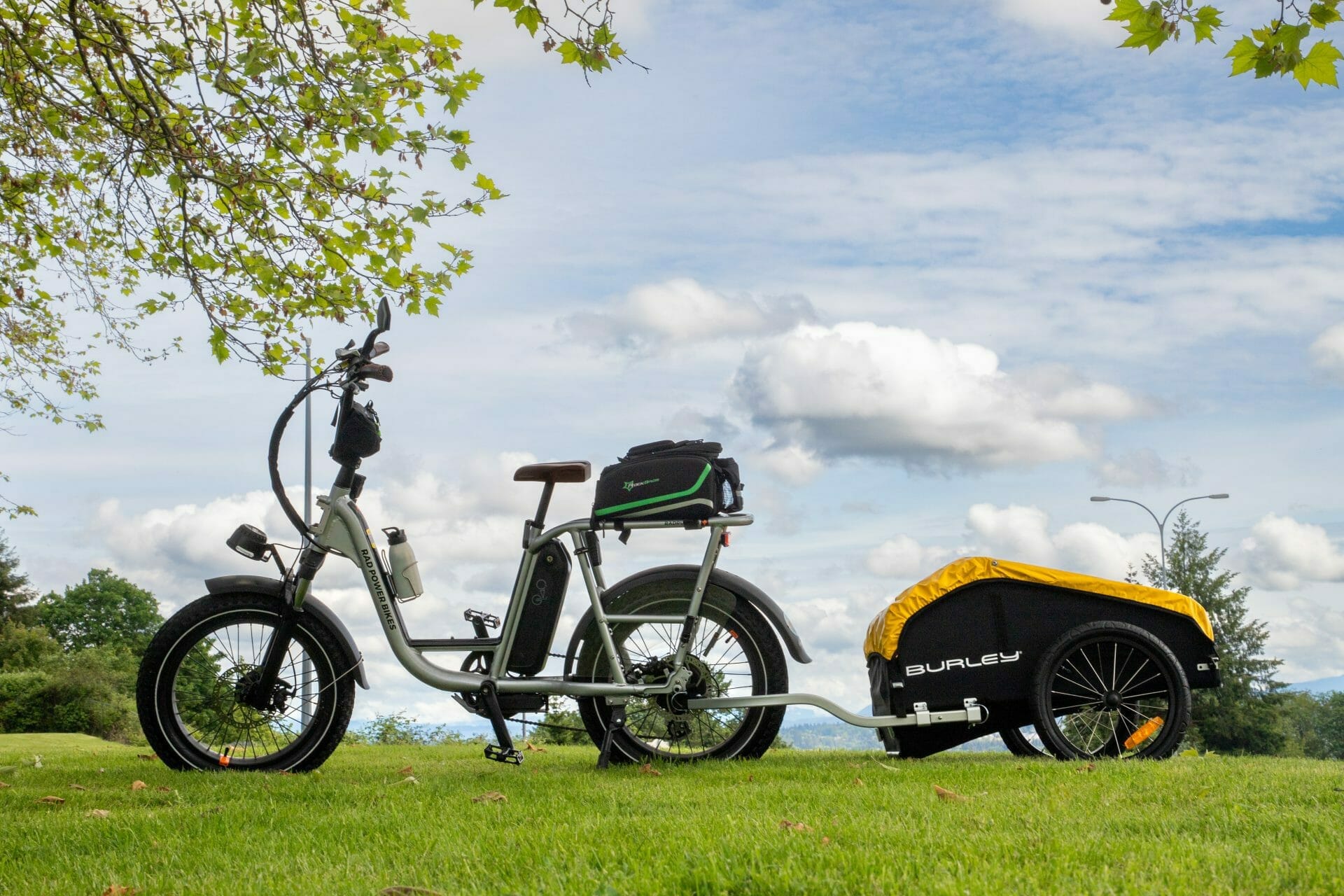 How Much Weight Can An Electric Bike Pull?

Ebikes are becoming increasingly popular because they're easy to ride, environmentally friendly, and also because it's much easier to either haul heavy cargo on one or tow a trailer carrying something heavy.

If you're using an electric bike, keep in mind that you'll still need to peddle to activate the motor, and if you're riding up steep inclines, both the cyclist and the motor will suffer from the additional weight. Also, batteries tend to drain faster when they're carrying heavier trailer weight, which means you won't get as far before needing to recharge them.

Electric bikes are designed to be able to travel at speeds up to 20 miles an hour, offer an incredible range of 30 to 50 miles, and be capable of carrying one rider.

There are various types of electric bikes available for consumers to buy. Consumers should first consider their own needs and then decide which type of electric bicycle they want.

Therefore, every ebike has a maximum load capacity it was built for. If you exceed that capacity, you risk damaging the bike’s components and reducing its performance.

Electric bikes can usually carry between 200 and 300 pounds of weight. Electric bicycles are usually built with thicker frames and larger wheels to accommodate heavy riders.

They're sturdy enough to hold up to the extra load, but their size makes them more expensive than other types of electric bicycles. And because they require larger batteries, they take longer to charge.

It's crucial to adhere to your electric bike's weight restriction for the following reasons:

Following the weight limit will ensure the bike's correct operation.

Safety - An electric bike needs to be able to safely slow down the rider when traveling down hills or making sudden stops in traffic. The brakes, rims, spokes, and saddles can all become worn out and harmed by too much weight.

Performance: When an electric bike is loaded to its maximum, the rider's range and speed are reduced.

Can an electric bike be used with a bike trailer?

An E-bike will work just fine for towing a pet or gear for camping. The trailers can also be detached. When you won't be utilizing them, you can remove them. In actuality, e-bikes are better suited to towing trailers than regular bikes.

This occurs as a result of the motor's increased torque. In steep terrain, you can get farther quickly without realizing the excessive weight.

Depending on the number of items you're transporting, you might be better off choosing between a bike with just one tire (a single-wheeled bicycle) or an electric bike with multiple wheels (a multi-tiered bicycle).

One-wheeled trailers are best suited for narrow tracks. They're perfect for making multiple turns. Four-wheeled ones are fairly stable but take a lot of energy to move. The next one is the two-wheel cargo trailers.

A two-wheeled cargo e-bike model is lighter than a four-wheeled one but carries less weight limit. However, be aware of its maximum power output.

Next, we have child carriages that include two or three wheels. These carriages include one or two built-in seating areas for children. They are versatile vehicles and can also serve as pet carriers. We do have pet carriages too.

There are two kinds of kid car seats: these are open and closed ones. They both feature straps that keep children safe by holding them in place.

There are many types of e-bikes available for kids. Some of them are strong enough to carry up to 300 pounds.

Always be sure to check specific local rules. Regulations differ from one region to another.

These types of trailers are usually made out of metal and they have an enclosed side.

The last thing you want is your pet escaping while on the road. Most pet trailers are usually two-legged and lightweight.

The ideal size pet trailer depends on the size of your pet. For larger dog breeds, make sure you choose a big-size trailer.

Will A Trailer Affect My Ebike Handling?

Having a trailer in tow will impact the way you move and control the ebike. It would be wise to practice using the trailer on some quiet roads with and without a payload just to see how you may have to adapt your riding and gearing to ensure you keep both yourself and your cargo safe.

Once you get used to the trailer, and, e.g., the extra drag on hilly terrains, you will learn to adapt, and use the combination of motor assist and the gears, in a way that enhances the movement of both ebike and trailer with greater efficiency.

Can an electric bicycle pull a trailer up hills?

On a regular bicycle, pulling a trailer uphill would be nearly difficult, but with an eBike, you can make it appear simple. When towing an electric bike trailer uphill, there are a few things riders need to keep in mind. Before hiking up and down steep inclines, make sure your gear is securely fastened down.

Naturally, your battery will discharge faster if you're using your engine to carry big loads up steep hills. When estimating how far you can go on a single battery charge, be sure to take that into account.

was However, if you are looking for the best performance, it would make sense to take into consideration the following design features:

The additional load of a vehicle will cause an extra drain of energy. And this will lead the batteries to deplete faster. And that's why it’s suggested to consider an electric bike with a higher charge.

Having a bigger battery capacity will permit you to travel further without the requirement to push harder. And this will lead to the battery draining at a more rapid rate. was

Generally, conventional bikes start with a motor with a power output of 250W. And it’s considered to be perfect for people who are going out for a simple city ride without any trailers attached behind.

If you add extra weight or cover more ground when climbing hills, you will need at least power outputs between 350 and 500 watts of a powerful motor.

Towing a trailer requires increasing the power rating of the vehicle’s motor by one level.

This is one of the types of motor. Mid-drive bicycles directly connect the pedals to the drivetrain using an internal chain. This combination allows for easy shifting and maximum power transfer from the rider’s legs to the bike’s wheels.

Mid-drive motor bicycles are usually more expensive than hub-motor bicycles because they require more design and engineering. Hub motors are attached to the rear wheel.

The best answer here would be "disk brake." If you're looking for consistent braking power with heavier loads, then you should go with a disk brake.

If your current electric bicycle doesn't have disc brakes, you may be able to improve its braking performance by upgrading to higher-performing rim brakes (also known as "disc brakes").

If you're looking at buying an e-bike, be sure to check its capabilities before you purchase it. You don't necessarily need to go out and get one that has a lot of power, but you should know whether it's capable of pulling heavy loads.

Don't speed when pulling the extra weight, because it could damage the motor and the electric bike battery.

The maximum amount of power that electric bikes can provide depends on the country's rules and regulations. Before purchasing an electric bicycle, you must thoroughly examine and inspect the law and regulations in your country.