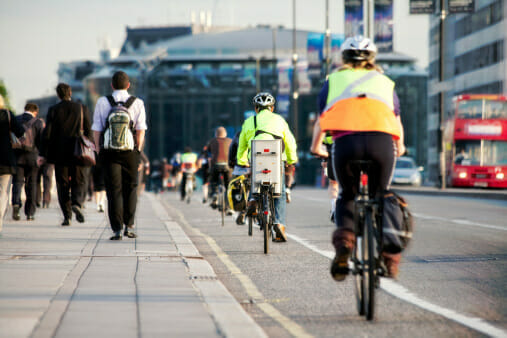 There is a lot of confusion about how far electric bikes can go on a single charge. This is because there are many different types and wattages of electric bikes. In this article, we will explore how far 1000-watt bikes can travel. Spoiler alert: it's pretty far! Keep reading to learn more.

Generally, an electric bike with a 1000W battery ranges from 22 miles to 60 miles (35~100 kilometres) on a single charge. However, this range will be affected by many factors, such as terrain, rider weight, wind speed and more. You can expect a range of around 40 miles (60 kilometres) in ideal conditions.

Moreover, you should read our previous article about how many watts are good for ebikes.

What factors affect the range of a 1000W electric bike?

After demonstrating that several different elements determine the range of an electric bicycle. What exactly are these elements, and how exactly do they affect the amount of distance that can be travelled by an electric bike on a single charge?

1. Current charge of the battery

Before attempting to ride your electric bike, check that the battery has received a full charge. When people first get their hands on an electric bicycle, one of the most typical mistakes they make is to start utilizing the battery right immediately.

There have been occurrences of battery failure that were not anticipated. Because the owner consistently used the battery until it was depleted, so lowering its capacity and diminishing its range. Batteries gradually lose their capacity to store a charge as effectively as they did when they were younger as time passes. Keeping this in mind, you might consider obtaining a new battery for your electric bike if the range it provides isn't satisfactory.

The range of an electric bike is decreased while riding larger bicycles or carrying heavier people. When transporting passengers or freight, remember that you will need to pedal harder or increase the degree of assistance you are using, which will result in a faster discharge of the battery.

The heavier the rider, the larger the power that must be drawn from the engine's battery supply, which reduces the maximum distance that can be travelled. The same principle applies to any cargo we put onto our e-cargo bikes; we must remember that every pound counts.

Lightweight electric bicycles offer a distinct advantage over heavier conventional bicycles because of this factor. At KBO, our bicycle frames are built from an alloy of aluminium, making them lighter and ultimately extending the bikes' range.

Similar to driving a car, activities that involve a lot of stopping and starting use battery power. When travelling in a huge city with traffic lights that are often changing, it is unavoidable that you may encounter this. Therefore, when you want to move ahead but don't want to crank the assistance up all the way, shift down to a lower gear and assist your heavier bike in getting started. Because of this, your initial speed can be reduced. However, this will significantly impact the amount of power your electric bike's battery saves.

Additionally, avoid abrupt acceleration, as this causes your pedal-assist bike's battery quicker discharge a lot of energy simultaneously. Your battery capacity will decrease directly due to the increased power usage per unit. If your powerful bike's frame is designed to be comfortable and you are riding more upright, you will find it more difficult to accelerate and keep your speed up at high levels. On the other hand, if you rely on motor assistance to help you acquire speed, the internal battery will discharge more quickly.

4. Type of tire installed on your 1000W electric bike

The weight of the rider, as well as the bicycle, is supported by the tire. In addition, it creates friction between the regular bike tires and the surface on which the rider travels. A smoother tire, as opposed to a knobbier and stickier one, will offer less resistance to the electric motor vehicle. The same can be said for properly inflated tires and a bike clean gearbox. Low-pressure tires have a higher rolling resistance than high-pressure tires, which require more, or sometimes maximum power of the common battery. It is essential to perform routine checks on the pressure in your tires. The most efficient tires for you and your e-bike battery sizes are those designed specifically for street usage and have tread patterns that range from low to slippery. Narrower tires with a higher pressure also give better efficiency, but at the expense of comfort.

Pedalling up a high incline requires more effort than cycling on flatter ground. The increased pedalling effort, optimal cadence, and going on hilly roads, if possible, are all factors that can significantly impact the entire range. The number of hills encountered and their degree of ascent will significantly affect the distance you travel. Because mountain riding often includes a significantly greater elevation than commuting, electric mountain bikes' battery capacity and power output are proportionally larger than that of electric commuter cycles. A single-charged battery will be able to travel further on a flat terrain that is as smooth and fast-rolling as pavement on a surface that is as rough, soft, and undulating as a mountain or forest route. Additionally, the terrain you are going on will decide how frequently you need to use your brakes, which will more or less cancel out the energy produced by the extra battery, especially for hilly terrain.

Various climatic factors also impact the range that may be achieved by a single charge of a proper battery for an electric bike. Your electric bicycle's maximum range might be increased or decreased depending on whether you ride with or against a tailwind. The temperature of the surrounding surroundings is another factor that has a role. Because of this, the battery can only store a certain amount of energy when the temperature is below zero, which limits the distance that can be travelled.

Batteries should never be exposed to conditions that are either extremely hot or extremely cold. You will see the finest range when the weather is not as harsh. There are, however, alternative approaches that may be used. Make advantage of specially constructed, insulated, and shielded enclosures to maintain your batteries at a more stable temperature. This is fantastic for everyone who wants to ride their electric bike while it's cold outside.

Tips to increase the range of the 1000W electric bike

You enjoy riding your electric bicycle, but don't you think it would be great if you could travel just a little bit further on a single charge? However, regardless of how far you can go, a bit more ebike range is always preferable. Ebike batteries are continuously being upgraded as new technology is produced, but it seems that this is the case regardless of how far you can go.

The good news is that you can take several straightforward steps to extend the range of your electric bicycle and squeeze every last electron out of its battery life. Although you can always modify parts on your electric bicycle to boost your range, making simple riding behavioural modifications can also significantly influence your bike's range and offer you the most value for your money.

#1 Go easy on a throttle

I know it might be exciting to pull the throttle back, take off into the horizon, or merely dash away from the stoplight. However, every time you accelerate, you are using proportionately far more energy than you would be if you were travelling at your normal speed. Accelerating may quickly max you out at your controller's limit, which is commonly 20 or 30 amps. If you have a watt meter like a CycleAnalyst, you'll know that a steady cruise on flat terrain can take 5 or 10 amps, but accelerating might quickly push you over the controller's limit.

Try to gradually into the throttle when you want to accelerate rather than hitting full blast. This will allow you to accelerate a little bit more slowly. You may significantly reduce the amount of power drawn from your battery by allowing yourself a few extra seconds to reach maximum speed. This not only conserves more power in the battery, allowing for longer rides, but it also helps keep the battery type at a lower temperature, enabling it to make better use of its power. And improved efficiency Means a better ebike range.

When tires are maintained at the air pressure rating that is their maximum, they have reduced rolling resistance, which means that your battery consumes less energy getting you going. Although I haven't been able to locate research comparing the pressure of bicycle tires to the amount of energy used, tests that are conceptually analogous to those done with automobile tires have invariably shown an increase of approximately 3%.

If the information presented here is also applicable to bicycles, then if the range of your electric bike is now 30 kilometres, keeping your tires inflated to their maximum level might increase that range by a whole kilometre. Who wouldn't want a free kilometre added to their trip?

#3 Always keep a small/secondary charger on your bike

When I'm at home, I like to use a powerful charger that also has a large cooling fan (even though my wife despises how loud the fan is), but when I know I'll be somewhere with a spot to charge my phone after a long journey, I'll sometimes bring a smaller charger with me. Simply put, this assists me in maintaining a full battery. Even if you only put 10–20 per cent of the charge back into your battery during the day, this will help maintain the health of your battery and add 10–20 per cent to the range of your electric bicycle.

If you follow all of these suggestions, your electric bike should be able to travel further without costing you an arm and a leg. If you truly want to improve the range of your electric bicycle. In that case, there is no alternative to purchasing a second battery if you have the financial means to do so but make sure it should not be the poor quality battery.